Skip to the content
Expecting to find The Arrival and the Reunion?
Moonlit Hedge

Digging in Deeply: Thoughts on Earth and the Food it Gives Us

The rains have begun to fall in a regular pattern for us in South Florida now. Predictable mugginess in the morning builds throughout the day and breaks into exciting thunderstorms in the afternoon. The bounty of moisture has lead to an explosion of growth among the plant life. My partner and I worked on our little green space a few days ago, transplanting herbs, trimming back the butterfly bush, plumbago, ferns and elephant ears. A few weeks ago a friend gave her some passion fruits that we’ve been talking about planting but they’re a challenging plant to grow in limited space. They remind me of how theater people are offstage in a way. Sort of bright and showy and hammy, popping up all over the place and always wanting to entertain and grab your attention. That’s not a negative comment, but it does mean that as the shoots and tendrils begin to dominate the environment, you have to train them to make room for the quieter, less showy plants.

We spent a better part of this weekend working with foods. As the chef de maison at our home, I’m in the kitchen often, preparing virtually every meal we share from scratch, repurposing leftovers and experimenting with new ideas. It’s a creative space outside of my other creative spaces and I think preparing food can be one of the most selfless acts of creativity a human can do. Sharing food expressly for more than yourself is an amazing feeling and lends an air of care and caution that might otherwise not be there.

This all coincided quite well with a recent gwers in my Bardic grade studies for the Order of Bards, Ovates and Druids. As they politely ask that the materials not be shared outside of the Order, I won’t go into too much detail. However, the focus of this gwers was meditation on the element earth, about what it provides for us as humans, what it feels, smells and looks like. At one point you’re to place your hands within earth and meditate upon it. It’s fascinating and powerful to focus so intently on something we all take for granted.

As a Taurus, I already have quite a strong earthy connection, even still, it’s good to dig deeply into the element. Creating with my hands is one of the best ways to honor that aspect of myself. As I said, we spent a better part of the weekend working with foods: bread, bone broth and homemade yogurt. This has all been inspired by reading the Holistic Squid blog, which my partner has been telling me about for a long time and now I’m finally immersing myself in. For someone who has been in the low fat, low carb mindset for a long time, it’s quite a change. It’s also about the farthest thing from the vegetarian/vegan lifestyle you could do. But, for me, it resonates. It’s about reclaiming the traditions of our ancestors, cooking in the way that they did (not as far back as paleo, though). It’s about eliminating processed foods, using whole fat, preferably raw milk to make yogurts, separating out the way to ferment vegetables with, using marrow bones from responsibly raised animals to gain all of the health benefits from the gelatinous stock made from them. Like I said, this diet may not be for everyone, but it resonates on an almost spiritual level for me. It connects me in a direct way with the Earth and I come away feeling more intrinsically linked to its cycles. This connection is a blessing that each of us can tap into, every day, whatever your dietary path is. Dig deeply into yourself and feel the earth, feel the energy. 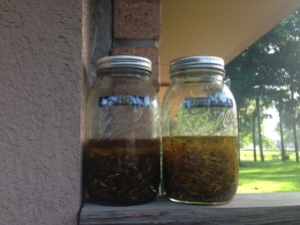 Also on tap this weekend: brewing up some medicinal oils with mullein, calendula and burdock. 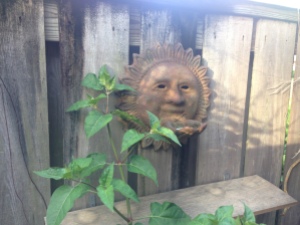 A simple sun shrine, one of my oldest altars.

Support me on Patreon to unlock more writing and other exciting creations!

Little old me, mentioned in the Betwixt and Between podcast!